Well, unless someone wants some custom work done.  We finished up double crop beans just after 4 PM October 31. 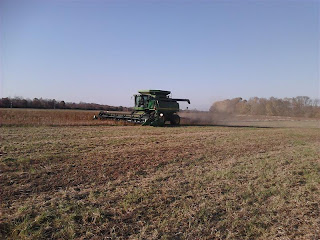 There was enough volunteer wheat it smelled like cut green wheat. 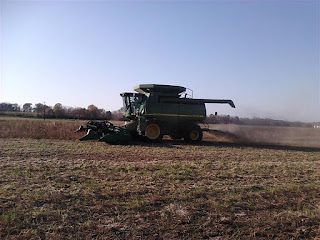 The question now is do we fertilize the volunteer wheat or dig it up?  Anyplace the beans were thin (most of the field) we had a pretty good stand of wheat! 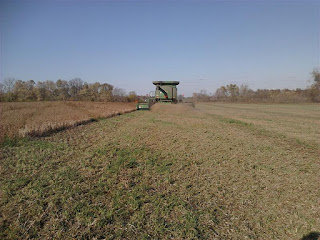 Yes, we'll dig it up.  We thought about spraying it and no-tilling it next Spring, but it is rough enough we need a little leveling.
Our goal has always been finish harvest by Oct 31, plowing by the start of deer season. Double crop beans have tended to interfere with that plan. But we got all the beans in and the combine in the shed.
Posted by Mike Bumpus at 8:15 PM No comments:

I was asked about the auger bit we use to stir talc in the seed boxes.  You see, with our corn planter you are supposed to add talc as a seed lubricant. 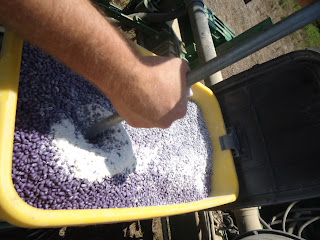 Precision Planting has come up with a mix of 80% talc, 20% graphite, that works even better.

The purpose is to keep seed flowing evenly to help the planter provide a better stand.  I know, sounds dumb.  The treatments on some seed corn can be sticky, especially if the humidity is a bit high.  Seed lubricants help fight that problem.
To get full benefit you need to thoroughly mix the powder to cover each seed.  This is different than what you did with the old finger meter planters.  Deere's recommendation was just scatter some graphite over the top and plant.  Vacuum meters, especially eSets, benefit from better mixing.
We were at the National Farm Machinery Show in Louisville a couple years ago and came across a guy selling augers for cordless drills to mix seed.

It does a very good job, although it does drain batteries quickly. 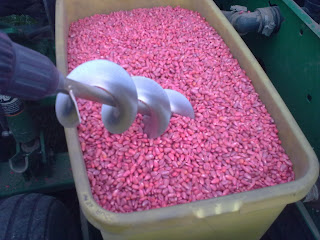 I was talking with someone who wanted to know where we got it.  I have since found it at Gempler's and other places called a Tanaka bulb auger.
Wish I could remember who asked me.
Posted by Mike Bumpus at 1:41 AM No comments: 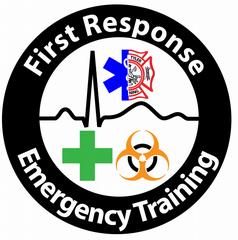 Did you ever notice when the government renames something it is never shorter?  They then compensate by using a acronym for it.  I haven't done much serious studying for 35 years.  A 6PM Tuesday/Thursday schedule gets a bit tight.

So I came home from EMR class, sat down with Sue for a bit, who was watching a TV show, and read the mail.   About 12:30 when I woke up I went to the office to catch a little paperwork.

Included in the mail were a couple grain checks for landowners.  The property is owned 50/50 so I had 2 checks to mail to one address.  I copied the checks, wrote a short note explaining what and why, stuck it in an envelope and sealed it, and stapled a copy of the note to copies of the checks for my files.

Something else to run down tomorrow.  I love bookwork.  I did just about clear my desk this week.  Don't look at the one beside it.
Posted by Mike Bumpus at 2:16 AM No comments: 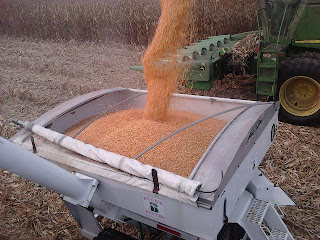 We broke in a couple new truck drivers Monday.  Pete and Nick were visiting down at the Prust Farm this weekend.  They shot guns, they fished, they rode 4 wheelers, then they had some real fun.   They rode in the combine with Aman cutting beans 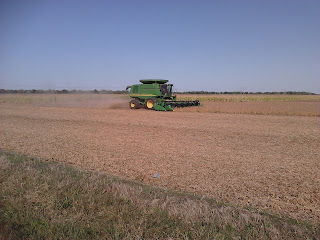 Then they helped me move a couple grain trucks. Oh, and they got a couple really neat hats. 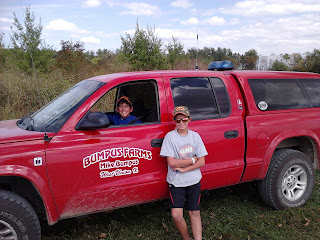 It was a busy day.  We were catching up on patches and small fields.  All told Aman was in 9 fields that day. Later that day we took out the bean test plot. 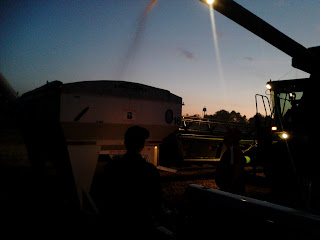 It was dark by the time we finished. 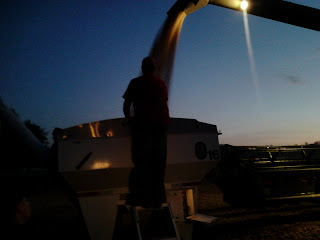 I don't have the results yet, but I believe 325 was the high yielder.
Posted by Mike Bumpus at 6:00 AM No comments:

You know the spreader that USED to be in the TOP of the corn bin?

Text message to Steve and Bob:
"You know the spreader that USED to be in the TOP of the corn bin?"
Bob:
"Uh oh"
Steve:
"Now is not?"
Me:
"Nope, is not anymore"
Which sort of explains this poor photo 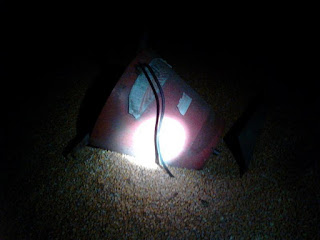 That was taken inside a grain bin full to the bottom of the door with corn. After dark.  Holding a flashlight in one hand and phone in the other. With a Band-Aid on one finger.  In a bad mood.
Maybe I should explain how we got to that point.
Some background:  Dad put this (or one just like it) in the bin when he built it.  I have unkind memories from the mid 70's of being in top of this bin when it was -40F outside and 150F inside with 130% humidity scooping corn from one side of a 27 ft bin to the other because the spreader didn't spread it evenly. You think I am exaggerating?  You obviously weren't there.
We started on corn Tuesday 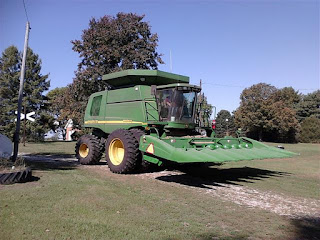 and I was using a Mayrath auger I had bought at an auction earlier this year.   It's a bit different than our Feterl's, but seems OK.  It was rusty so I wasn't pushing it too hard ... especially after pushing it too hard and spending a half hour with a pipe wrench unplugging the swing-away.  I decided after a couple loads to push a little harder.  At which point the door on top popped open and a half a pickup load of corn ran off the bin onto the ground before I got it shut down.  For those who don't deal with augers much, most augers have a door of some kind that acts as a sort of "relief valve" if the output gets blocked.
The auger had settled just enough the spout was too close to the motor in the spreader and the corn backed up. Great.  So I climbed up to the top of the bin, shut the door, checked everything out, climbed back down, unhooked the hydraulics and hooked up the raise cylinder and raised the auger just a little.  Hooked everything back, restarted and began unloading.
It seems to be OK, so I am walking toward the pile on the ground to scoop some corn when I realize it is sprinkling corn.  Not raining, just a sprinkle. I suspect I know the problem, the auger is now just a little too high and corn is bouncing out.  So I climb back up the bin.
Yes, the spout is just a little high and corn is hitting the bracket holding the spreader and bouncing out.  Seems like the spreader is making a funny noise, so I'm looking at the spreader, listening to this noise, and trying to figure a good way to pull the spout about an inch so it is right in the middle of the spreader ... when the spreader starts bouncing up and down.
I am assuming everyone knows what a grain spreader is.  Let me pause and explain.  For the purpose of drying and storing grain it is best if the grain is level in the bin.  Naturally, it falls in a pile.  There are various mechanical devices to spread the grain evenly as it is put in the bin. (It's a good theory)  Most of ours look similar to this 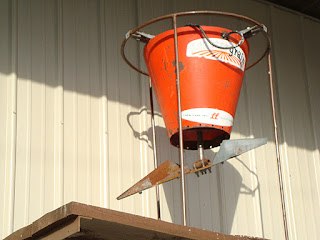 (I got that from a web site with a used one for sale ... and someone bought it!)

You can see how it is mounted.  There are 3 arms bolted to the funnel that hang over the edge of the bracing in the hole in the top of the bin. It is designed to put a bolt in each arm to help keep it in place.  Dad said it didn't need them.  He was right, it just sets there.  Has for 30+ years.  Until now.
It starts bouncing up and down, one arm waving above the brace it is supposed to be setting on. And silly me tries to put the arm back in place.  What I am going to do when I get it there I haven't thought about.  On top of the bin, auger running a pretty good stream of corn, by myself.
These are the things that make a 911 call with a poor outcome.
I was unsuccessful.  The arm comes back down, misses the brace, and starts to fall inside the bin.  With me holding onto it. For a VERY short time. I realize this is a bad idea and let it go.  While I begin the scramble down the bin to shut the door on the truck and turn off the auger it is falling inside the bin with corn trying to bury it.
So I am setting there catching my breath and send the above mentioned text message. And realize my finger is bleeding.  Note to self:  There WILL be First Aid Kits  in ALL the trucks ASAP.  ( I thought there were but apparently I was mistaken) I go to the shed and look in both the medicine cabinets Dad put in the tool room. Note to everyone:  If a container says Band-Aid on there WILL be Band-Aids in it.

Not tip cleaners or little tools or small parts.
I find a Band-Aid, clean my finger and apply it, take a Band-Aid box full of tip cleaners and a can of paint out in the shop, paint the former Band-Aid box black, then go back to the bin.
Then I go find a flashlight and see what I can do. By the time I figure out what to do and get started, Aman has caught up with the dry corn, brought the combine in, walked back, got a truck and put it in the shed, then comes down to check on me. He gets there about the time I'm taking the poor picture at the top.
The spreader may not go back in this bin.
But we have time Wednesday to ponder on it, because we not only have caught the dry beans, we have caught up with the dry corn as well.
Posted by Mike Bumpus at 6:05 AM No comments:

It's a hurry up and wait harvest season

I'm beginning to feel like an undertaker.  They set around waiting, then when they are needed everything has to be ready right now.  This Fall is kind of like that.  The most common thing I hear talking to other farmers is "Yep, I'm caught up with the dry___."
We have had some good harvesting days, 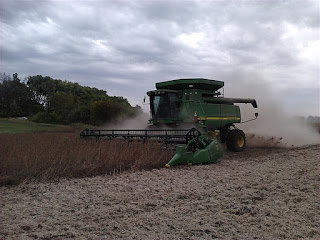 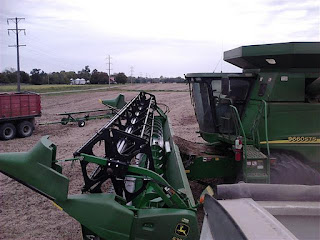 including some no-tilled into corn stalks 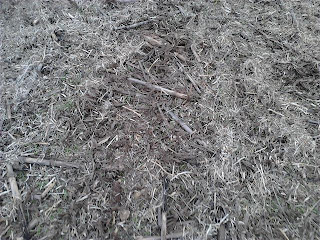 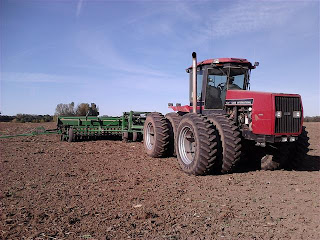 caught up with the harvested ground. 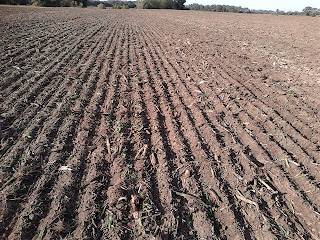 We have about 35 acres of wheat left to plant. But since it still has corn standing it may be a week or two before we get to it.  I was actually impressed.  We planted 225 acres of wheat in 2 days.  Didn't get started until 9:30 or later because of heavy dew and getting things ready.  First day stopped at Noon to go eat, second day Aman had to quit early for both a funeral visitation and a wedding ... and I was home by 6 PM.
This week we have maybe a day's running then we'll catch up to the dry beans again. I've not pushed a pencil to it, but my top of the head guess is we are about 1/3 done with first crop beans.  We're trying to decide if we should plant a bit more wheat.  I'm not sure if we ordered too much seed wheat or if the company sent us too much, but we have PLENTY of seed on hand.
If you need some seed wheat give Aman a call.
The new seed tender 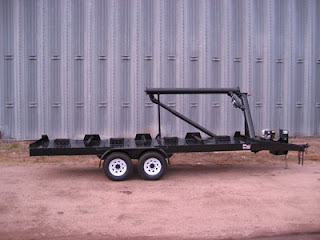 (OK, the loaner until ours comes in) worked beautifully.  Takes a bit of getting used to, but does what we hoped.
So we sit and get ready, then hit the ground running until we catch up, then we sit and wait some more.
Posted by Mike Bumpus at 6:00 AM No comments: