Ever have one of those days ...

Ever have one of those days when things didn't necessarily go wrong, they just could have gone better? That kind of summarizes Wednesday. It wasn't bad, just could have been better.

We've been trying to haul corn. Seems simple, Right? But when you factor in more snow than we are used to, posted roads, a new county road commissioner, soft yards, trucks not being available, etc. it has been a challenge. Monday Littlejohn Grain had trucks available and we had permission to get them on the road. Sue had a follow up Dr. appointment so I was away from the farm for the morning. First 2 loads went well. Third load the semi had to be pulled out of the yard with a tractor. So we stopped that for a few days.

We decided Wednesday it had settled enough our trucks could load. But we had committed to something else for the morning so it was just before noon when we were finally able to start. We are loading corn out of the old government bins and don't have much choice where the auger is set. Well, we could set up a wagon to feed a second auger to a truck in the drive … but odds are it would be in the wrong place. And that is a real joke trying to run 2 tractors and augers to fill a truck. Been there, done that, learned it was not a good idea.

Got the white truck out and started filling it. We had 2 bins feeding one auger with the unloading augers Aman put together this winter, and it was working great … until we tripped the breaker. Had to run a cord to a different outlet for one motor.

Got the white truck full and went for lunch. After dinner Aman took the white truck in and I got the black truck out and filled it. Took it to the elevator and on the way back I HAD to get fuel. Put the nozzle in the tank, turned on the pump … and gasoline sprayed everywhere. The hose was good, but the factory crimp on the end was loose and let it leak. So I cut it off and hose clamped it together. I'm sure that violates a half dozen fire, electrical, and other safety codes. It is a temporary repair until I get a new hose.

This time spent fooling with the hose delays me enough Aman catches up to me. So much for the efficiency of running 2 trucks. I get mine fueled, get back to the bins and start loading .. and almost get it loaded when... yep, I'm stuck.

But at least Aman is there to help. We unhook the auger tractor, pull it out, and decide maybe a tag axle truck was not the best choice today. I noticed the radiator on the truck is overflowing badly. Well, we recently replaced the heater core and maybe it was overfilled. I took the load to the elevator, watching the temp gauge all the time. It stayed right where it should have.

I stopped at Mom's to blow the crud out of the cab before parking it and notice the overflow is still running and the engine sounds like it is boiling. I got out the water hose and cooled off the radiator. That was when I noticed the upper radiator hose had collapsed. I called Ron, he said most likely either the radiator had been low on water (I don't think it was but my pre-trip inspection was lacking a bit this time) or the thermostat stuck. The those probably collapsed because cooled it off too quick for it to draw water back in fast enough from the overflow tank.

So I put the black truck in the shed and parked it so we could change the thermostat when it cooled.

I get back to the bins to find one bin is low enough Aman has the door open on it. That is not a big surprise, because I knew one bin had probably 500-1000 bushels more than the other. One was really full, the other wasn't. It's also 4:00 so the elevator is closed for the day. I decided we weren't going to fight getting out the sweep auger today, we'd scoop a little in the one bin and run out of the other and fill the truck and park it in the shed. Aman gets back, I climb in the bin, and we start loading. Works good until my unloading auger quits working. Motor still runs. Belt and shaft still turn. Screw doesn't turn. The unloading auger has a tube the pulley fits on and goes through a bearing that then bolts to the flighting. Broke where it all comes together.

So we take the head off it and Aman goes to repair it while I finish loading the truck. With one little auger. As Dad used to say “If you think that is slow get a shovel and a bushel basket”. Then I realize something sounds different. The noise is the empty unloading auger rattling. Yep, second bin stopped flowing. I shut everything down, put everything away, and call it a day.

Calling it a day means go home, clean up, go to the funeral home for Frank's visitation, eat supper, and be at a Fire Department MABAS meeting in Flat Rock by 7:00. And since I'm secretary they really would like it if I was there.

It wasn't a bad day. Nobody got hurt, nothing was damaged but a foot of inch tubing, overall it was an OK day. But I was glad to be home when I finally got there to stay.
Posted by Mike Bumpus at 5:45 AM No comments:

Field work has begun ... didn't last too long, though. About 4 PM we looked at the little field in front of the house and said "Let's see if we can get the neighbors stirred up."  So we got out Baby and tied her on the little Soil Saver.  It was just almost dry enough 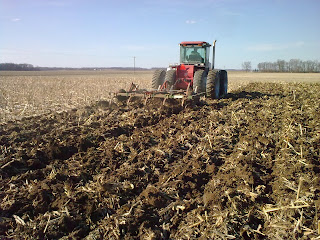 In fact, when I was doing the north end rows I had to carry the chisel plow a little because I ran out of traction.  When a 4 wheel drive tractor runs out of traction on a 9 shank Soil Saver ... it's too wet.
This morning we picked up the bed for the blue truck.  Probably be next week before Ralph gets a clear space for it.
Oh, I mentioned stirring the neighbors. Aman called on his way home.  Jay had the field south of his house about half done.  Close, it's getting close.  Well, not too close.  Here's the latest river stage.  Murphy's 20 will be wet again.  Sure makes me miss farming the river bottom (listen closely to the tone of my voice when I say that)

Posted by Mike Bumpus at 1:59 AM No comments:

Had the planter in the field today ...

... didn't have any seed in it, but you know, minor details.   I've never been satisfied with how our planter closes the seed slot in less than ideal conditions, especially on the more clay soils. The slot doesn't close, the sidewall smears, all kinds of not beneficial things happening.

There is a good solution.  I just don't want to spend more for a planter than I gave for all the ground I own.  So I found this a pallet of various planter closing wheels on a dealer's lot that a customer wanted his to sell.  We looked at it.  Actually we looked at it several times.  Figured what it would cost to buy all that stuff new.  Some of it had never been installed.  I bought it to play with experiment a little.

We had to make a few bushings, downloaded some instructions, made some guesses.  But we got a bunch of stuff on Wednesday and took it to the field.  Now, we only have about an acre that we can do this with. The hill at mom's is a sandbar.  But we got it out and played a bit.  I took a few photos and we put it away.

I posted some photos on AgTalk ( http://talk.newagtalk.com/forums/thread-view.asp?tid=155299&posts=28#M1114825 ) and some of the guys have been discussing what we were trying and what had worked or not worked for them.  We've gotten some new ideas to try.  Found a couple things we did wrong.  Got an answer we were looking for.  Here are a few of the photos

We have since learned the Martin wheels we have are to be used as pairs.  If they are used a singles with the John Deere closing wheel they need to be 15" instead of 13".  And we have learned the early riser imitation is made by J.S.Ag Innovations.  We are pretty sure we're going to use them on the rows that will be male corn.  That way it is quickly evident you re on the right row when planting male. Also it leaves a nice 4" wide flat area to plant into.
Posted by Mike Bumpus at 12:12 AM No comments:

What HAVE we been doing?

Doesn't seem like we got much accomplished this week, but it took all week to do it. We got the headlamp assemblies, 2 way radio, drill monitor, and GPS in Baby this week.  I ordered HID bulbs for it, but they are back-ordered until about the 10th.

I guess Spring is getting close, we finally washed last fall's mud off the combine, put it in storage and brought the planter home.  That was after putting new front tires on the combine.  I've sweat the last couple years, watching a crack in the side wall of one tire go round.  On bottom it would get bigger, on top it would close, get bigger, close.  We had worn the size and name off the sidewalls from rubbing against stubble.  BEI had a promo, plus a projected 8% price increase, so we took a deep breath and put a pair of Michelin Megaxbib's on it

They cost a bit more than Firestones, but I think (hope) over the life of the tire they will pay.  I fully expect to take these off the combine and put on a new one when we trade it in a few years.  I gave more for these tires than all but one of the pickup trucks I have ever purchased... and that one truck was close.

We're talking about trying starter fertilizer again.  I don't want to mess with it, and the return is not consistent, but when it does work it pays for the years it didn't and then some. We still haven't decided yet.  And if we use starter we can use Capture insecticide with it and cost about half what we are spending on Warrior.  I worry more about wireworms than I do rootworms and capture will do more for that cheaper than anything else.  We went to a meeting about it this week.  After listening to everyone's pitch I said "You know, if I do everything you guys tell me I'll get 10 bushels more from this and 6 from that and 11 from something else ... I'm going to have to buy another truck!"

Speaking of trucks, we removed the seats and pulled the carpet out of the KW.  It was beyond cleaning.  I don't know what replacement carpet through Kenworth is other than the parts guy said "Oh that's kind of expensive".  We didn't have any success finding any aftermarket.  We got to pondering on it, went to Big R and bought a bed liner for a Ford shortbed.  Aman cut it to match the removed carpet and put it in the cab.  If a guy were going over the road it would not be acceptable, but for our use it will work better than carpet.

Well, if the pile on my desk gets any higher I won't be able to see the screen.  Time to shuffle some papers.
Posted by Mike Bumpus at 10:11 PM No comments: