Took the busted differential to Russ Fisher's yesterday and traded for a used one.  Went to unload it from the pickup this morning and Ralph goes, "What's that?  Looks like a piece of a gear!"  We pulled the power divider off and it was not quite up to specs.  Seems one of the gears was rather chewed up and some others were not great. (I forgot to get a photo).  So we took it back and got another one.  This one looks great.  The plan is to put it together Friday morning then start on the sleeper removal and PTO install.
Ralph said while we were this close it would be foolish not to replace the drive shaft seals.  So when I left Fisher's I wondered around to the other side of the airport runway to Terre Haute Truck Center.  Walked in and said I needed the input shaft seal for an Eaton 402.  Parts guy says "That's a 127719." and walked back and grabbed one off the shelf.  I was impressed.
Posted by Mike Bumpus at 8:32 PM No comments:

Ralph finally got a spot cleared and got Old Blue inside.  We took advantage of the warm shop and put the name on the doors. They are concentrating on the drive train first, then we'll pull the sleeper off. 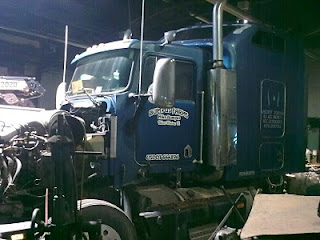 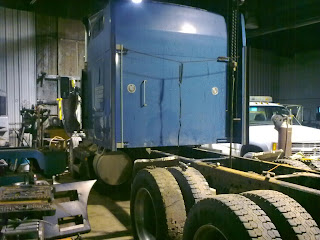 First order of business is the power divider.  It is the front part of the front rear axle. 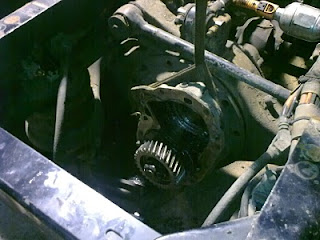 As you can see by the following pictures, it kind of self-destructed.

Our plan is to get it apart and see just what needs replaced, then head for the junkyard. 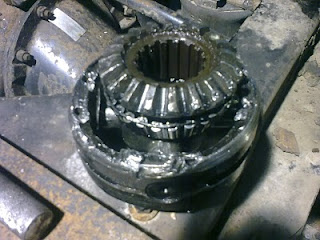 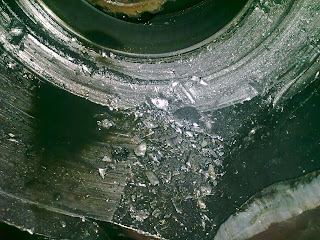 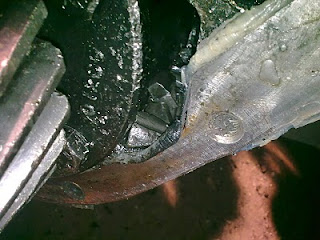 Once we get it all ready we have to figure out how to get Old Red in to take the bed and hoist off so we can put them on this one.  But we are finally making progress.

And if you are keeping track, it WAS Tuesday.  Ralph said they would start on it Tuesday .. just didn't say which one.

The new to us tractor

the one we just traded for ... 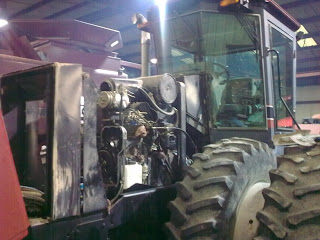 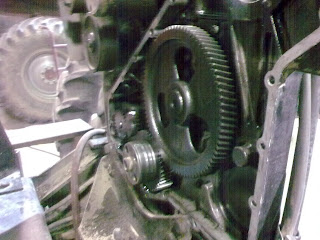 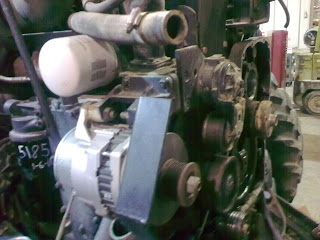 Actually it is a good thing. This is one of the reasons for buying a tractor locally instead of 2 states away.  When we bought it we knew there was a sensor problem.  The speedometer was giving an error code.  It was agreed it would be fixed before delivery.  They got it in the shop and found a couple oil leaks that needed replaced, so they tore into it to fix the leaks before delivery.

I'm sure if I had bought it in Ohio the leaks would have come with the tractor.

So we are progressing.  The augers are all repaired, waiting on the weather before we reinstall them.  We got to looking at the ones needing repaired.  The long one was OK except for the first foot or two of flighting being damaged.  So we cut it off the same length as the short one.  Fixed that!

Then we proceeded to replace the screw in the other one.  I'd gotten an ...as ebay calls it NOS (New Old Stock) ... auger screw from Robin at Bunker Hill.  We found the tube was rotted out under the motor mount.  And the bearing was bad.  So we thought "Maybe we ought to just replace the whole thing with new."  So we wondered up to Oakland one day and talked to them about it.  No problem! Got one in stock.  $600 and change.  One problem, (well, two if you include the $600) it is a totally different design motor mount.

We came home, talked about it, got a of a couple feet of old auger tube from Dustin, dug a new bearing out of the drawer (it is now the same bearing as a JM rolling basket, a Hagie male cutter wheel, and a Do-All pulverizing wheel), got a new bearing mount at Rural King, and Aman put it all together and squirted some aluminum paint on it.  Did it for about $400 less cash outlay than a new one.

Dad would have liked it ... except he'd have found an old auger someplace to take the screw out of.

Posted by Mike Bumpus at 5:49 PM No comments:

I don't feel like we have accomplished a thing this month ... but then I get to thinking about what has gotten done and feel a bit better.  Let's see, we did some rearranging in the tool room and put in a bolt bin full of metrics, we have 3 augers in the shop right now in various states of repair, the black truck has the heater out of it and parts setting there to fix it,  I guess we have made a bit of progress.

Sue and I made a whirlwind trip to Wisconsin last week to buy some truck parts.  The Kenworth will need a Power Take Off to drive the hydraulics to raise the bed.  I found a farmer online with exactly what we needed, and bought the PTO, pump. hoses, controls, and tank for about what Ralph said the PTO was going to cost me. Which reminds me, I need to take a photo of the right side fuel tank on the KW.  We plan on removing one of them and I know a guy looking for one.  I took a camera ... forgot to take any pictures...

While we were getting ready for that trip the Farm Pride salesman showed the John Deere to a customer.  We had it plugged in so the engine was warm, she fired right up ... and died.  We think the hydraulic oil is so thick from the temperature that the pump couldn't handle it.  That or maybe it had just a little moisture in it. We never run the tractor when it is that cold.  I hope to fire it up this week when its a bit warmer and it works right.

I've been working on paperwork this weekend.  First of the week I need to take some tax papers in to the accountant for W-2's and 1099's.  I sat at this desk all day Saturday and right now the papers are stacked higher than they were before I started.

Oh!  I was going to put up a link for this but the online edition isn't out yet. I was mentioned in an article in Successful Farming this month.  It was about text messaging.  I had answered some questions from Cheryl Tevis of SF last fall and they used my response in the article.  Yes, I did cut out a copy for my scrapbook.  January 2010 page 32.

Here is an excerpt:
Mike Bumpus, West Union, Illinois, also finds that texting is a useful tool. “We use texting because it’s more flexible and reliable than voice cell coverage or cell voice mail in our area,” he says.

“We use it quite a bit to get in touch with employees of our contract seed corn company. Their corporate safety policy doesn’t allow cell phone use while driving. If you call someone, by the time they find a safe stopping point, you’re into voice mail. Texting allows them to read messages in a safe and convenient way,” Bumpus says.
Posted by Mike Bumpus at 9:11 PM No comments:

No I'm not online, I'm doing paperwork for taxes ...

Between the holidays and family visits and weather and other distractions the farm has kind of been on hold the last week or so.  Come Monday we'll hit the ground running and start acting like a business again.  But it's been nice after this long dragged out fall to just kind of take a break and adopt a "don't worry, be happy" attitude.

We had a major systems failure here in the farm office.  The KVM switch died.  I have 2 desktop computers.  One is business and the other is everything else.  But with the KVM switch both ran off one keyboard, monitor, and mouse.  So I'm back to this computer over here and that computer over there.  It shouldn't be that big of a deal, but once you get a system in place changing it is a pain.

That kind of describes a record keeping change I've been contemplating.  I've been trying to convince myself to break down and make Farmworks FarmFunds software package work for me (see http://www.farmworks.com/products/funds).  It's a great system, but to make it work I'm going to have to change how I do some record keeping.  It's about as big a change from what I have now as what I have now was from Dad's ledger book.  It's kind of the GIGO problem (Garbage In Garbage Out).  To make it do what it is capable of you have to put the right data into it ... and I'm not sure I'm disciplined enough to make it work.

I used FarmTrac for several years and decided to go to Funds.  It integrated with all my Trac records flawlessly.  But when I tried to implement Funds I realized it just would not work with the way we were set up (this was a few years ago when Dad was still going strong).  But it integrated my Trac records so completely I was unable to go back to what I had.

Well anyway, I better finish printing out the report I started on 12 hours ago.  I just love taxes.  I'm constantly reminded of something Gramps said. "Paying taxes is bad, but not having to pay them is worse."
Posted by Mike Bumpus at 11:12 PM No comments: