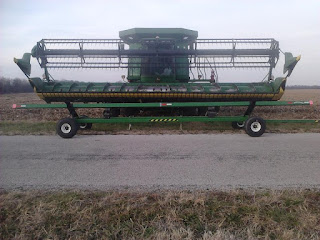 This is the one we were looking for, taking the head off the combine for the last time in 2012.

I'll be honest, there were times when I didn't know if we would get done or just give up for the year.  But about 3:30 PM November 29, 2012 we finished harvest for the year.

2012 Harvest started May 30 with wheat. Six months later November 29 we finished grain sorghum.  How did it yield?

How 'bout them Cubs?

Places tend to get named around here.  For instance the house at 604 East Union to me is Rush Dolson's old house. To others it is Jim or Cindy Winger's or John or Cindy Conner's house.  Anyway, now it is history.  We got the property with the plan to make an access driveway to our field behind it.  Here are a few interesting photos. 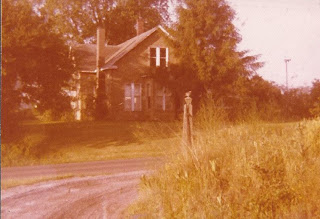 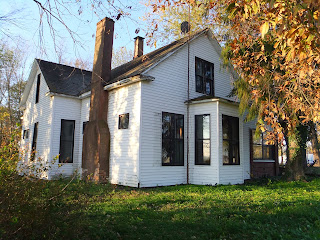 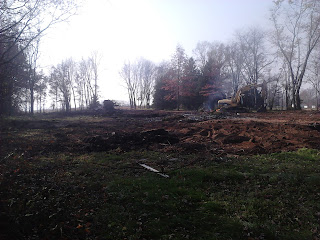 If you look closely you can see the concrete where Cindy's new addition was between where the photo was taken and the excavator.  I probably should have just taken out all the trees and made a field out of it, but I've probably gone way over budget getting it to this point.  And I haven't filled out any "Sodbuster" forms at the Farm Service Agency.

It's still a nice building site.  There are 2-3 really nice young oak trees, some cedars, lots of other trees still around.  It could become a large home site, a trailer court for several trailers, a place for a tool shed or seed warehouse, lots of possibilities.  And if you notice right in the middle of the bottom photo we have our entrance into the field.

We had planned to leave the old garage but it mysteriously caught fire.  I was at home doing paperwork (hadn't even been outside that morning) when one of my younger firefighters called.
"Ummm .... is that old garage where you took out the house supposed to be on fire?"
"Well, no, but if it is we're not going to try saving it."
By the time Aman and I got from my house to there it was fully involved. 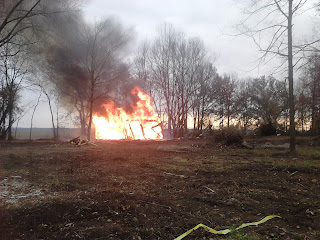 Must have been those oily rags in the corner.  We're sure it wasn't arson, because it wasn't worth $150 as it was.

Robert said when he came over the hill the smoke was the same color as a burning track hoe. It was a bit disappointing, because there were two little persimmon trees just south of it I planned on saving.  The heat from the fire did enough damage we went ahead and removed a half dozen trees close to it we had not planned on taking out.  We are hoping that little oak tree in front of it didn't suffer any damage.  3-4 trees just south of it were smoking by the time the building collapsed.

Now for the real work, picking up sticks, sprouts, roots, leveling ... maybe it will snow tomorrow.
Posted by Mike Bumpus at 6:00 AM No comments: