Cutting wheat ... quickly and slowly both

We got rolling in wheat this week, then ground to a stop. 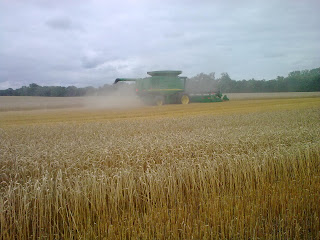 We cut one field we know from experience took just about all day with the old combine. Aman pulled in the field at 12:55.  At 4:55 we had the head on the trailer and started to the next field. 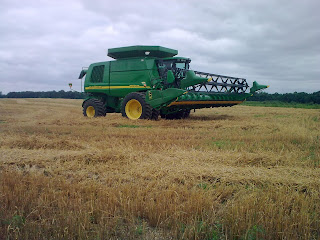 We're mostly done.  Everything left is just north of town.  But we had to wait on the neighbors to get theirs cut so we could cross them with the combine and three other little fields are too wet and getting greener. 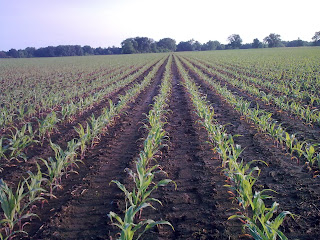 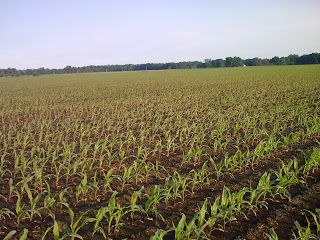 Corn is growing good, except where there is too much water.  Not too much I can do about it.  You can barely walk across the field right now.
Did some irrigator maintenance, checking tire pressure and gearboxes.  I've got a few tires starting to concern me 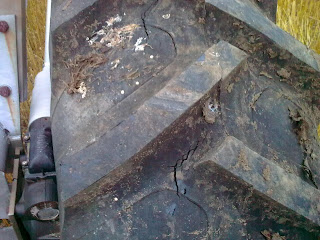 The bad part is Gary Bonesteel isn't in the business any more. The last tires we had replaced Gary replaced every tire on a 1300 foot system by himself in a morning and had time for a coffee break and still be back at the shop by noon.
Posted by Mike Bumpus at 8:28 PM No comments:

It's June! cut wheat, cultivate, plant beans ... all at the same time

Yes, I said cultivate.  I realize some consider that a 4 letter word. 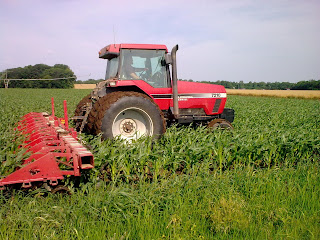 We (OK, Aman) ran through one of the seed fields Tuesday morning.  I think he was convinced I was nuts. The corn was almost to tall to cultivate. The ground was wet enough to pick up on the tractor tires.  The only thing out there were some grassy spots and some little bitty just emerged weeds.  But those weeds were either tea weed or button weed. Yes, there was some damage where the guy driving the planter didn't get the second pass right on top of the first pass.  But I think it was worth it.

Once Aman got started and I got oil back in the irrigator engine and got it moved I went back to the shed to hook up the Bush Hog and mow roads (I think it is one of the things Aman dislikes even more than cultivating).  I looked south and saw ... a combine making dust?  Then I saw another combine head down the road.  So I got the green beast out and cut a sample.  17.1%  I'd looked at RADAR and the weather forecast before leaving the house and expected to be rained out by then.  So I called home and had Sue check for me.

I took the 10 wheelers to the field and by that time Aman was finished.  We ate lunch, came back a little after 1:00 and ... still 17%. Oh, and the elevator management informed us they  couldn't take anything over 16.5%

I think we need to do some tweeking on our grain handling.  Staying ahead of this combine in corn is going to be impossible the way we have been doing it.  We cut 50 acres or better by 5 PM when the sky fell.  We had a half inch of rain in about 10 minutes.

Needless to say, I don't expect to cut wheat Wednesday.

But that is OK, because Wednesday we can try and figure out why the semi setting the yard at the shed won't start.  And why the Ford 10 wheeler won't run.  Or we could re-wire the 560 that caught fire and burned all the wiring up. And I have to replace the antenna cable on the GPS unit on the spray tractor.

Job security.
Posted by Mike Bumpus at 5:50 AM No comments:

Did you get a release to put that on YouTube?

Ahhhh!  The joys of river bottom farming. Aman got the bean plot planted. We planted as much of the ground the river affected as we could yesterday. Still too wet underneath on about 60 acres. Most of it you could drive the tractor across. But when you raise your implement the weight pushes the wheels through the crust and into the mud. I stuck a shovel in the ground. For 3 inches it was hard, dry dirt. At 6 inches you could squeeze water out of it!
I watched the neighbor come down the road with his 40 ft interplant planter and pull in across the road from me.  I thought "Oh, this won't be pretty". His first pass he made it 2/3 of the way through the field and it sank.  He didn't get stuck, he sank it. 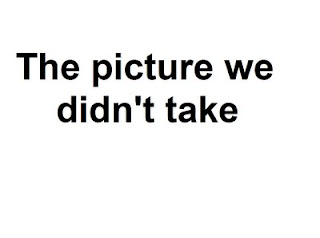 Aman came by about then and talked with him. He seemed in a pretty good mood for having  40 ft of planter and front wheel assist tractor buried to the planter frame.    I told Aman later he should have asked for a release to put the video on YouTube.  He said we should have Mom pop some popcorn and take a couple lawnchairs down to watch.

Funny thing is, they went and got a big tractor with lots of wide tires, pulled it out, and he didn't have any more problems.
It's like I mentioned, I could drive the tractor almost anyplace in the field, but the transport wheels on the implement had so much weight on them they pushed through the crust and sank in the mud. The river was down to 12 feet then bounced up to 14.   It's 12 feet again and supposed to be dropping.  Maybe someday we can plant the rest.  I don't know if we will get done planting or just quit.
Posted by Mike Bumpus at 6:33 AM No comments:

"You guys with irrigators sure are lucky..."

Some comments are best ignored.  Things like "Must be nice to ride around in an air conditioned cab listening to the radio all day" or "So what do farmers do the other 10 months of the year?" or "You guys with irrigators sure are lucky...".
All you can do is smile and agree while thinking to yourself "You dumb***"
Yes, I am lucky.  I have a profession I chose to be part of.  I was given the opportunity to do it ... twice.  I think back to the things Gramps and Dad did and put up with.  And I am lucky to have irrigation.  I remember not having it.  I keep reminding myself of that late at night sometimes. 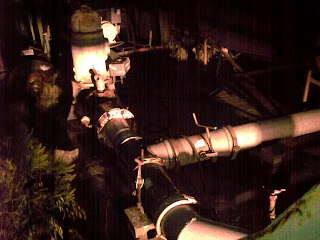 This photo wasn't taken that late at night.  But it is a reminder of what it can be like.
I should write a book.  Actually I started it years ago and have probably lost my notes.   I was setting at the restaurant one afternoon listening to some more experienced coffee drinkers talk and thought to myself "We need to write these stories down".  I did some of them but not enough.  And now Dad and Gramps are gone along with all their stories.
Things like Gramps driving an M and pull type corn picker from West Union to near Humbolt on New Years Day. No cab.  No insulated coveralls. Grandma and the kids followed in the car and when he got so cold he couldn't stand it he'd get in and warm up.  Yes, I am lucky.
No big things to report this week.  We are done planting corn.   OK, we quit planting corn.  There is about 50 acres we were going to plant to corn that is going to beans.  We still have maybe 100 acres to plant if it ever dries out in time.  About half  of that is dry enough if we can get to it.  I think we may have to drive across planted corn to get to it. The field looks like an Illinois legislative district map the way it curls and curves around on a flat square 160 acres.
We are irrigating one end of the field while the other end is too wet to cross. There are some low spots in the field that were too wet when we worked them and are now cloddy.  We planted them anyway and felt the need to give it a little water to help it along.
Not too many photos this week.  You see one picture of mud drying, you've seen them all.
Posted by Mike Bumpus at 8:31 PM No comments:

Remember my post a couple weeks ago "When the neighbors on two sides have things all planted and my ground is still too wet, am I being to particular?"  Well, we decided since the neighbors on all four sides had been planting maybe we should. Ground was too wet but we hit it with a disk and rolling harrow anyway. Let it dry a couple hours and hit it with the Tilloll and planted it.
Well ... most of it.
Yesterday the dry spreader got stuck in a mud hole (I WARNED them about it). I was disking to day and did something similar 75 feet away from it. I didn't sink so much as I lost traction. 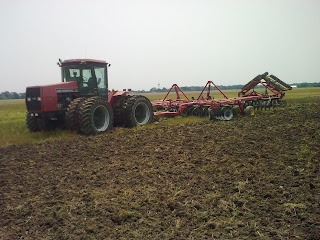 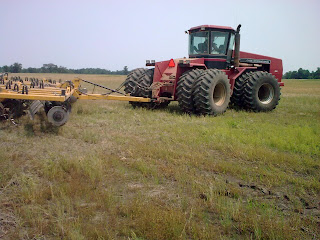 Only broke 1 log chain pulling me out. Front tractor was going faster than the back tractor and something had to give.
But by 10 PM all 80 acres was planted. Aman said if I had told him this morning how good this field would look tonight he wouldn't have believed me.
Posted by Mike Bumpus at 10:30 PM No comments: