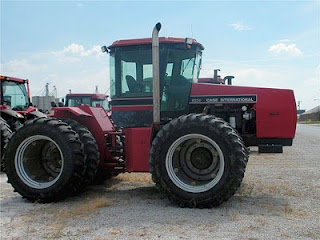 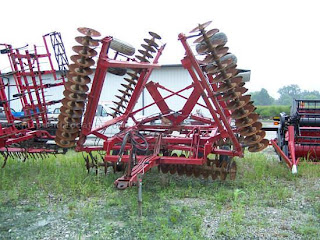 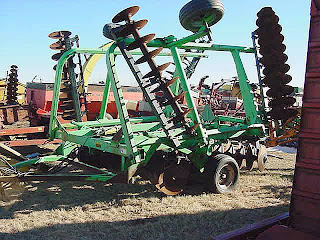 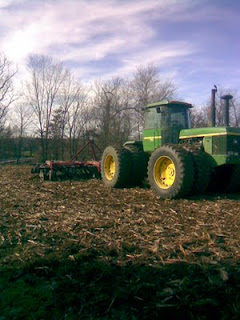 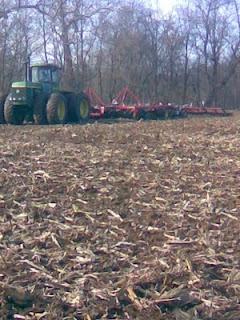 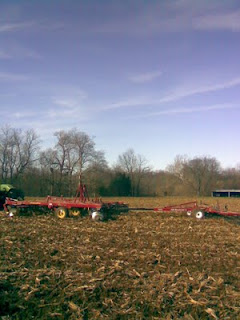 Harvest is over ... finally

We Did It! Harvest is FINALLY over!

We survived trucks breaking down 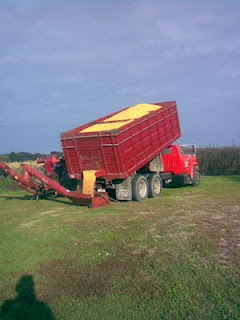 (Well, maybe.  One to work on in the morning) 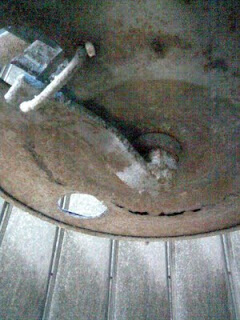 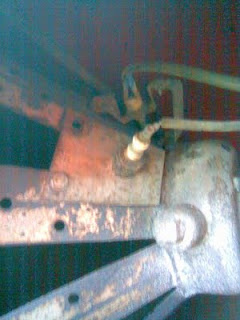 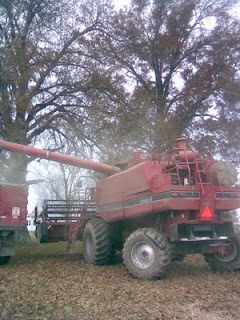 Made a few ruts 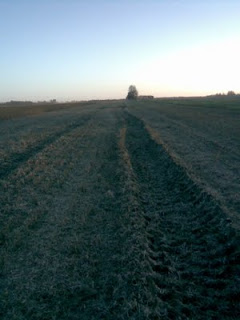 Even took out a couple test plots 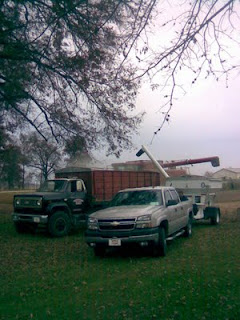 Yields were not record breaking, but considering everything quite respectable.

Posted by Mike Bumpus at 9:33 PM No comments:

While I was having a fun afternoon updating wiring on a Stirator in a bin full of dry corn, Aman took out the test plot in front of the house.  I'm not including experimental's in this list, but might modify it later if they become part of the line up. Yields are shrunk to dry bushels.

Dad always said this little field in front of the house was the best dirt on the farm.
Posted by Mike Bumpus at 10:36 PM No comments:

What's that bright thing in the sky?

We had a day of mostly sunshine, some wind, overall a pretty nice day.  But beans still tested 18% when I tried them at 3:00

Oh! If you get to wandering the internet you will find there is also a http://www.bumpusfarms.com/ site.  That's not us, that is Bill & Doug in Ohio. Nice looking cattle by the way:

.  Don't know Doug.  Exchanged and email or two but have never spoken.

There is also a web site for for Bumpus Harley Davidson

(http://www.bumpusharleydavidson.com/)  That's not us either.

Posted by Mike Bumpus at 7:33 PM No comments:

Remember the ditty on Hee-Haw? If it weren't for bad luck I'd have no luck at all? That's how the fall is beginning to feel. We're about a third done with soybeans. Milo is done except for 10 acres of dry corners. Corn is barely started ... as in we have shelled about 800 bushels and quit because it was a lot wetter than we expected. Visit my blog at http://walnutprairie.blogspot.com for the fun I have been having with drying that corn.

And we learned something not to do to a 366 Chevy truck engine. Everyone said we should replace the points and coil distributor with an HEI pointless distributor. The red truck needed a tune up, and we thought rather than replace old with new of the same we'd take the opportunity to to upgrade the ignition.

Aman went to O'Reilly's and told them what we wanted. "This is just the thing" What they didn't know, and it seems most Chevy gear heads don't know, is that a 366 is a "tall deck" engine. That means the Big Block distributor looks like it will drop in ... but it won't drive the oil pump. We found this out about 100 yards down the road when the engine quit running.

O'Reilly's says the part worked correctly, we should have made sure it was the right part for the application. They did allow us to return the distributor and ignition wires. I need to frame that receipt, as it will be the last one I ever get from O'Reilly's.

We have found it doesn't matter how you do it, rebuild what we have, buy a rebuilt, buy a used one and put it in, etc and etc it is going to cost $4000. When you get all done it is going to take at least $4000 to do it. Rather than put $4000 in a 35 year old truck we are exploring other options. So here is a photo of the 75 Chevy truck in action, never again to be duplicated. 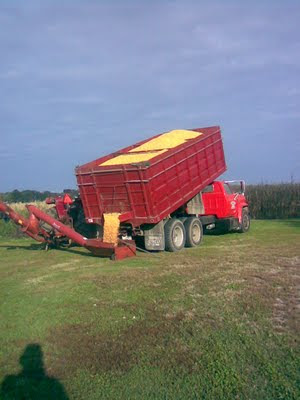 Our plan is to put the bed and hoist on a different chassis this winter. We have one spoken for. That will be a whole 'nother story once we get it going. I'll just say Wabash Valley is involved.
(I can hear Jim groaning.)

And it has rained or drizzled and not dried any for most of the week.

Oh well, if it were easy anyone could do it.
Posted by Mike Bumpus at 9:45 PM No comments:

How has the fall been going? When you are unloading beans at the elevator and see a huge sun dog like this you get this gnawing feeling in your stomach. 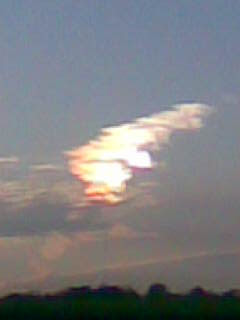 That was followed by 3.6 inches of rain over the next few days.

We did find something out this weekend. If you wish to replace the old points and coil distributor on a Chevy 366 truck engine with a high output pointless HEI distributor be sure and drop the oil pan and replace the oil pump. Because the oil pump rive shaft will not work with the new distributor. We found this out after the truck ran 100 yards down the road and quit.

Fortunately we were able to pull it back to the shop, reinstall the old distributor, and get everything going. So far it runs good and maybe .. just maybe .. there is no damage.

We got back in the field on Columbus Day ... to find the hand shelled sample of under 22% corn was 26% from the combine. Notice how nicely it peaks in the truck... 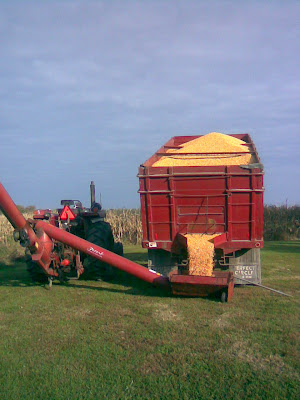 After a load and a half of that we put the bean head back on and put the combine away.

I fired up the dryer fan with no problem. Went to hook up the thermostat for the burner and discovered the !@#$!! mice had gotten inside the control box on the fan. There was so much bare wire I was afraid to touch anything and turned it off at the breaker box. So tomorrow I get to do some rewiring. Oh, and the Stirator won't work either. I fear this is going to require 20 ft ladders inside a grain bin to repair.

Now if we could just figure out how to get the bucket truck inside the grain bin ...

Posted by Mike Bumpus at 7:37 PM No comments:

It's going to be a long fall

Harvest has started ... and stopped ... and started again ... and stopped. It's going to be a long fall. The field in the photo above has been harvested on the left side of the photo. The beans on the right side are still too green. We've checked corn and checked corn ... may not even need a combine, may have shelled it all by hand checking moisture. Driest Saturday was 28%. But we have cut all the milo but the late planted dry corners (it was 23% Friday), we have cut close to 200 acres of beans, we are ready to start planting wheat this week. Yep, a long fall is in store 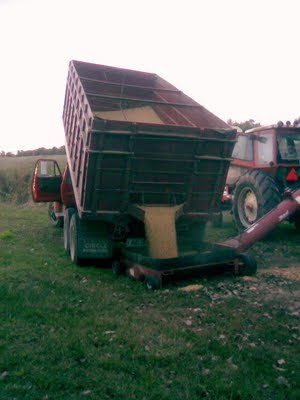 Posted by Mike Bumpus at 3:23 PM No comments:

First a rainbow picture. Can't get to many of them 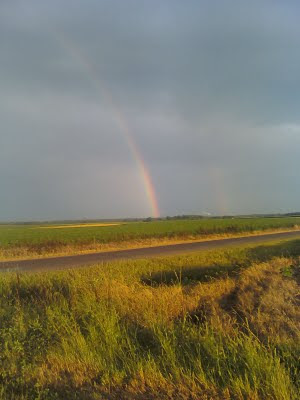 How about a couple irrigator photos?

How often do you see one from this angle? 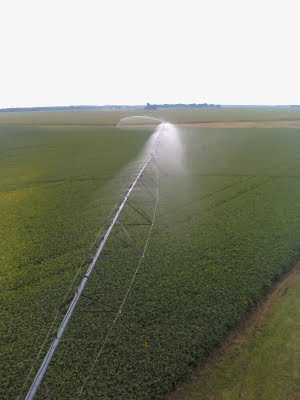 I was working on the light using the bucket truck so grabbed the phone and took some quick shots. Oh, and does irrigating pay? Look at the next photo and see if you can tel where the water didn't reach 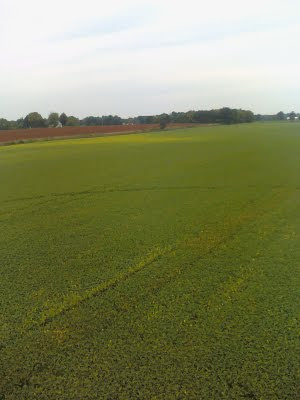 Posted by Mike Bumpus at 9:42 PM No comments: 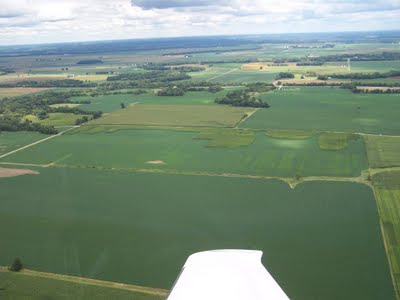 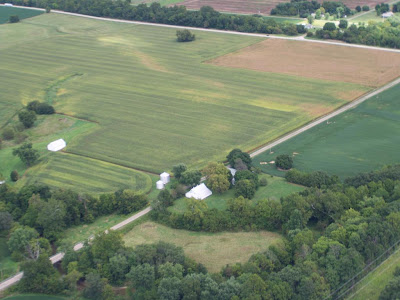 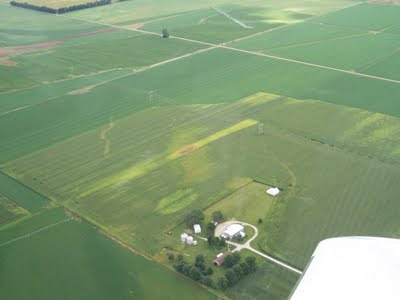 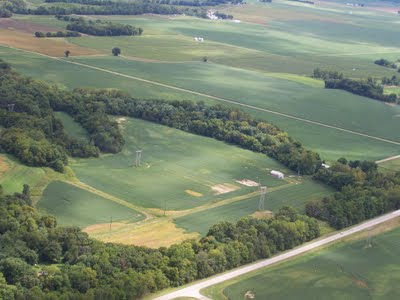 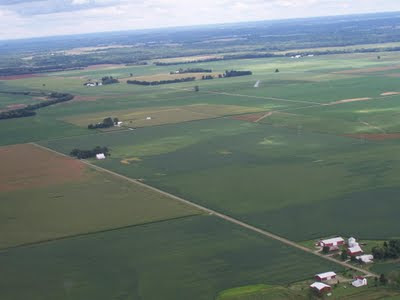