"What you been doing?"
"Irrigating"
"Besides that?"
"Just irrigating"
Illinois irrigation systems were not designed to provide all the water a crop needs.  They were designed to supplement rainfall a few times a year.  This year has placed a heavier than normal demand on them.  Everything I did today involved an irrigator in some way.  I'm facing problems we never faced before.
For instance, I have 2 engines I can't keep cool.  I think there are multiple reasons:
1.Air temperature is above normal
2. The radiators need the fins washed out
3. The radiators need taken to a radiator shop and cleaned internally.
The only one of those I can do much about right now is #2.   So I have had to resort to more creative measures
On one I ran a hose from the line to the pivot to a sprayer nozzle with a valve to adjust flow 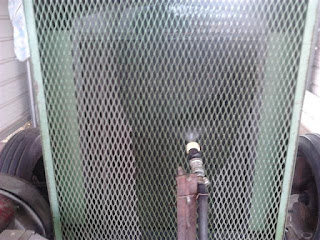 On the other I got to digging around in Mikey's treasure chest (aka the crib) and found a soaker hose I bought in a clearance aisle.  I think it included some adapters or such I used and the hoses were extra freebies.  I took out a pipe plug and put in a boiler drain, 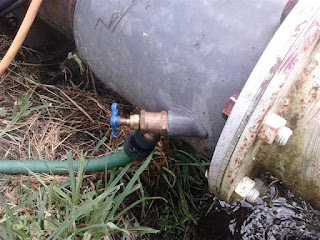 then ran a garden hose to the front of the engine 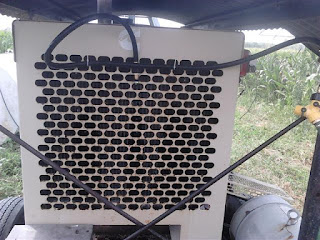 I don't like doing either.  It just limes up the radiator.  But it is doing the trick until we can take them off and go see Roady 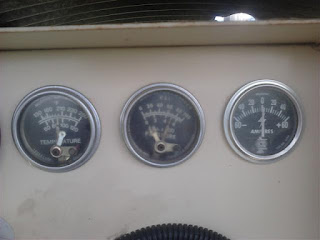 Thursday will start with a second trip to Ashmore.  Lyman's alternator quit charging.   AHW (if you're old enough you'd call it Coffey Brothers) had one at another store, and got it transferred in Wednesday afternoon. 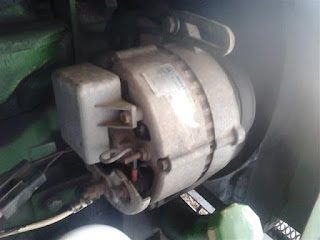 That wire on the right side going to the bottom terminal on the old one goes to the middle terminal on the new one.  So does the one on the left side.  The new alternator had 6 pages of details about rewiring the reman alternator ... none of which seems to match this.  So better safe than sorry, my Thursday morning will begin at Ashmore over two little wires.
I'm beginning to understand what Scott Knoblett meant.  He said one time "I get up, I work on irrigators, I go to sleep."  He never mentioned a bed.
Posted by Mike Bumpus at 6:00 AM No comments: 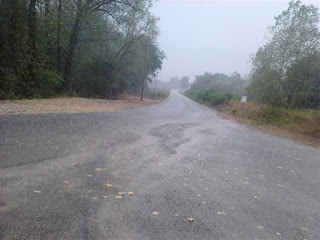 I actually did a little storm chasing today.  I was going to check on Aman's livestock, and before leaving home I checked radar.  There was this little red dot north of Darwin.  As I got farther north the sky got deeper blue and darker.  I went on north of Darwin and eventually found this 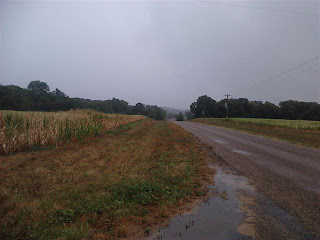 It was wet road!  And no irrigator around!  I'd about forgotten what it looked like.  However, it won't do that corn any good 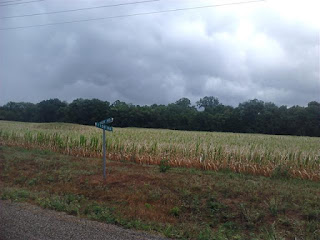 I guess it's not just me.  By the time I got back to Aurora Bend the road was dry again.  But as I was checking things in Darwin I came back to the truck to find this 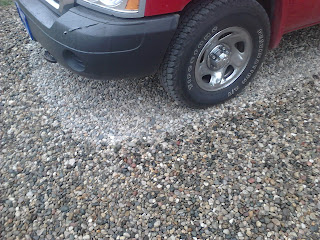 Very odd.
Sue and I went to Marshall this evening and actually saw water in the ditches!  I'm told there were spots that got 4 inches of rain today.  I'm guessing I had a couple tenths at my house.  Come to think of it I have a gauge up.  Kind of forget how to use it.  Aman's neighbor thought he had about an inch.
This is the first Saturday night in WEEKS I haven't had an irrigator running.  I'll probably start one tomorrow afternoon.
Posted by Mike Bumpus at 11:35 PM No comments:

It is Friday, isn't it?  Started out the day with a surprise drug test. I could not tell me in advance I was being tested.  It was really tough, because I am a fairly sharp person and catch on the things like that quickly.  But I am also very good at following guidelines, so it was a total shock when the visiting nurse stopped at 8 AM to get a sample.
I then helped with the tear down of the BluMed tents at the park we had for the 4th 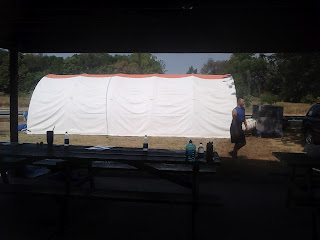 I'm not sure which is more difficult, putting up or tearing down in an orderly manner.
Then I started messing with irrigators. Switched from the big system south of the road to the towable to park it so it could be moved.  Noticed Lyman's north system was off, so checked it and restarted it.  Came back a half hour or so later and was off again EXACTLY  where it stopped last time it made a circle.  So I decided it must be the commutator.  I spent a couple hours on top of the pivot cleaning brushes and contact rings.  Started it up, ran about 15 minutes and shut down.
THAT was when I realized I hadn't turned the safety switch to run.  So it must be the engine. it was hot.  Hmmmm...  So I plumbed up this 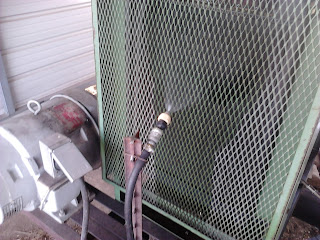 and it seems to be working.  I don't like it because it will lime everything up.  But desperate times lead to desperate actions.  I changed oil in the south engine, parked the north system and drained the oil, moved the towable, started it up and made it home by 9 PM.
It may be time for a shower.
Posted by Mike Bumpus at 9:59 PM No comments: