Got this email today:
Mike, congratulations on winning the Topcon Precision Ag System 350!  Here’s a photo of the system you will get: 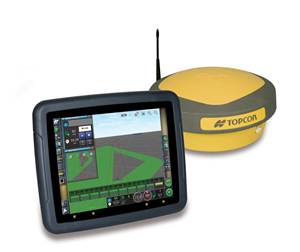 Can you tell me what kind of equipment you have and if it is steer-ready?

We will be working with Altorfer, Inc., our dealer (AGCO) in Lincoln, IL to get you the equipment. Prize will be presented by a regional manager from Altorfer and Topcon’s Midwest Regional Sales Manager, Justin Jones, from Sioux Falls, SD.

Because you are only about 150 miles from Lincoln, IL, we’re thinking we would like to do this on your farm. That will let us get some of your equipment in the photo which we’ll use for press announcements.  If that is okay with you, do you have a day where we might do this in the first half of April?  We have to line up a photographer, coordinate the equipment you’ll be getting, etc.

Do you think we might do this sometime during the second week of April?  Let me know and, again, congrats on winning the Topcon System 350!!

We've talked about what to do with it.  One choice is the spraying tractor 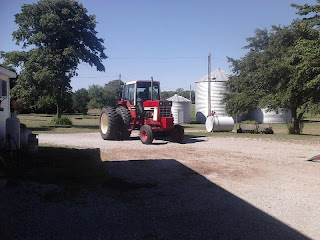 The MX 275 would be the ideal choice, but it already has the 750 autosteer unit in it 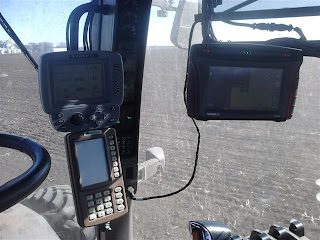 And the combine shares the 750 display with the 275 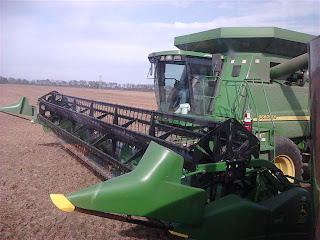 So right now we are leaning toward the 9270. 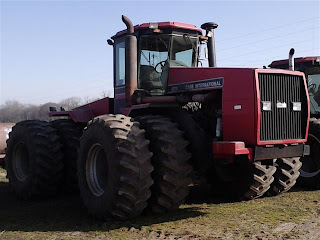 The Topcon 350 has a lot of features that we probably won't be able to take advantage of in this tractor.  We may decide to do some changling before next year.  But for now it looks like the best destination.

Posted by Mike Bumpus at 1:00 AM No comments:

Blasted new phone.  I'm in a meeting and it's going off.  How do I shut this off?  Who's calling me from California?  Must be another tool salesman.  I'll check it later.

Later:
"You have one new message. Touch 1 to hear new messages"
"This is Joe Robertson with Topcon Precision Ag. I'm calling about a prize drawing you won at a recent farm show.  Please call me at ......"

{ring ring}
"Hello this is Joe Robertson"
"Yes Joe, this is Mike Bumpus.  I was in a meeting and you left a message on my voicemail."
"Yes Mr. Bumpus.  You signed up at our display at the Louisville Farm Show and won out Grand Prize, a Topcon 350."

OK, so I'm thinking this might be more than a hat.  Then he says, "We'll send this to our dealer, Altorpher in Clinton, Illinois, who will arrange for the installation."

I'm getting the idea this is more than a new hat.  I thanked him, said I had to get back in my meeting, exchanged some info and pleasantries and hung up.  Later I called Becky.

It's been a long day.  3 meetings, stop by CellOne to fix my new phone that doesn't work (when you do a software update on a iPhone you have to re-enter some stuff), go to Rural King,  plus visiting at Mom's because both brothers are home.  I'm just now setting down to the computer to look it up. 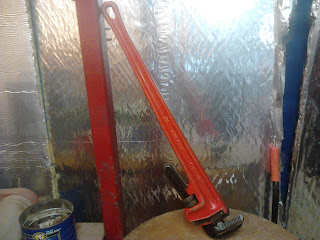 I didn't give the $179 it is listed for most places. Actually I bought about a dozen all totaled. But only one 36" one. 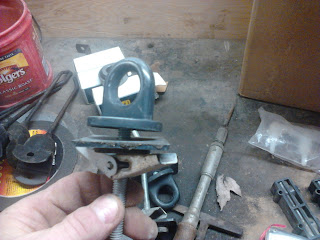 I bought a $2 box with 6 of these in it.  I've been going to buy some to mount on my pickup bed to tie things to.  Sometimes you buy the box just for the box 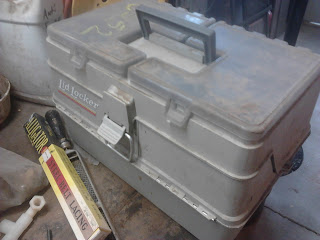 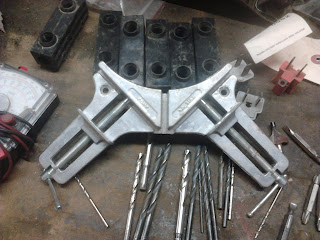 I have no clue what this is for.  But all these drill bits and screwdriver bits came with it in the tackle box. 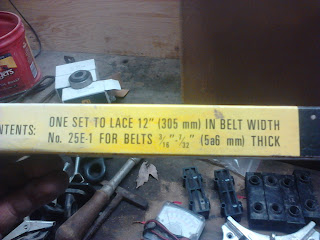 And I really doubt I'll ever need to lace a flat belt. Or sprayer divider blocks. 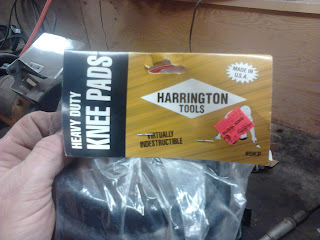 I might use the knee pads ... if I can find them when I want them. Sometimes you hit a treasure.  These cost a LOT more than the $2 I gave for all of them 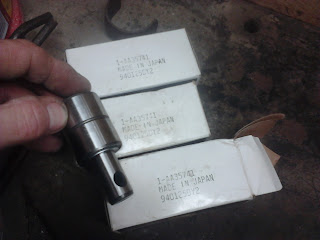 And then you get a really good buy, like a heavy duty condensate pump for $2 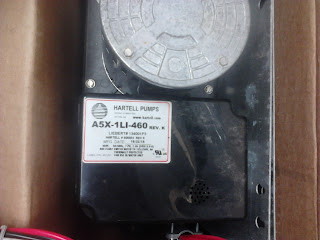 Only to discover it is a 460 volt motor.  But it is a REALLY nice one
Posted by Mike Bumpus at 6:00 AM No comments: