We're about half done with corn, we're waiting on beans to dry, still a little early to plant wheat.  Yeah, I know, Dad used to plant wheat any time after the 15th of September.  We're not getting too excited until after the first of October.
Oh, in case you're in Tennessee or Wisconsin or something and forget what it looks like from the combine here are a few shots through the windshield.  5676 is a really trashy corn at times. 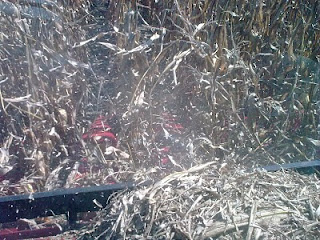 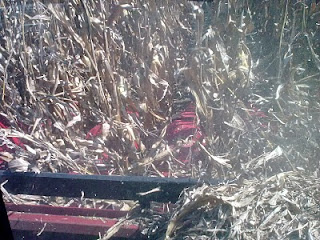 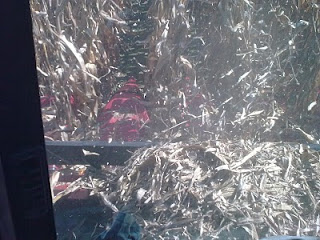 We finished corn on Gramp's place today.  Don't have a clue what it made, but my guess is over 180 on the whole field.  Put most of it in the bin, except for some from my part to cover a fall delivery contract. 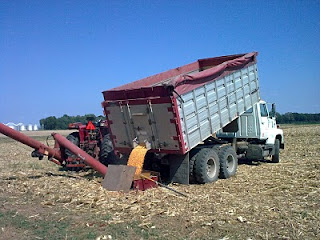 Steve and maybe Bob can probably look at that photo and not only tell you where it was taken but what bins we were unloading into.  And because of the bins we were putting it in make a pretty good guess on the moisture.  Sometimes a little knowledge is a dangerous thing.
I left a message on the Beck's rep's voice mail this afternoon.  We knew he was in a meeting in Indy.
I said:
"Durn Beck's corn.  We used to get by with 3 little straight trucks.  Now I have 3 10-wheelers and I'm still having trouble keeping up."
He hasn't called back.
Posted by Mike Bumpus at 9:49 PM No comments: 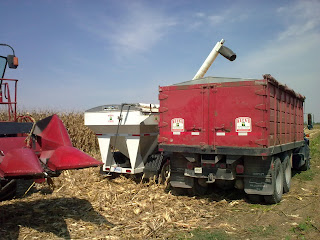 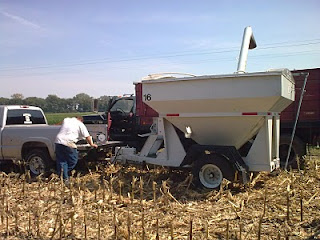 Posted by Mike Bumpus at 6:02 AM No comments:

"Boy, those sure look drier than they did a couple days ago."  Any farm boy will tell you that sentence is almost GUARANTEED to cause work.  Cut a few beans to get a moisture test and just kept going.  I set up the auger to the bean bin (it IS the "Bean Bin"  You couldn't put corn in it, it might fall over of something).  Experience has taught me to always check for paper wasps when opening the doors and electric boxes on the Prust Farm bins.  Painful experience.    I have also learned to look under the rungs on the bin ladders.  For some reason paper wasps like that spot as well.  Didn't find the first nest this year (so far).  But I was surprised by my little buddy looking up at me 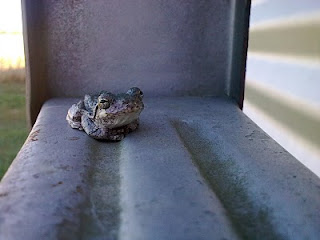 He was just setting there on the ladder waiting for me.  I almost stepped on him before realizing it was a tree frog setting there and not just a lump of something. 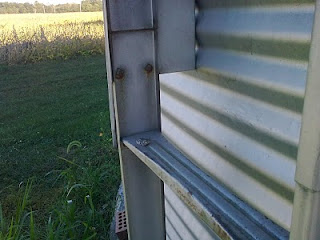 They are a bit wet, but they will be going on the bottom of a bin with an aeration floor and a lot more fan than they need. 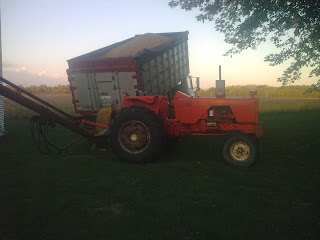 We'll probably get them a couple feet deep and then be stopped for a couple weeks.  They'll dry out well by then.  Yield is better than I expected, but then again I have learned not to have great expectations from this field.  These are Liberty Link beans

Our main purpose was control of a specific weed that Roundup is weak on.  It worked well for that purpose, but I think RR beans are easier to keep clean.  We have a little over 100 acres of beans close to ready then we'll probably go back to corn.
Posted by Mike Bumpus at 9:33 PM No comments: 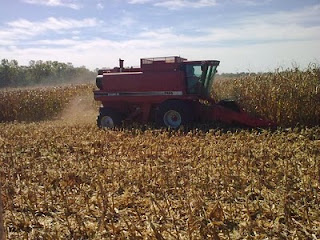 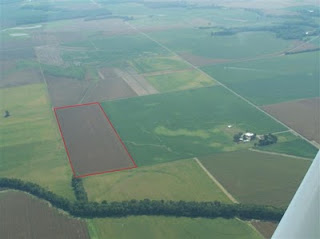 Yields are pretty steady in the 180 range
We had the Beck's DSM bring out his weigh wagon (we've mowed around it all summer) and check a couple places in one field. 189 and 190.  The 40 acres he took the checks in averaged 180.  The 20 acre field went 180.  Been some lines at the elevator already.  We're taking in corn now and saving our bin space anticipating more problems later. 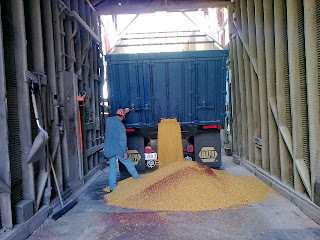 But we could be wrong.  I mean, I'm the guy who went in with the 6 row and spotted in corn in the drowned out spots. 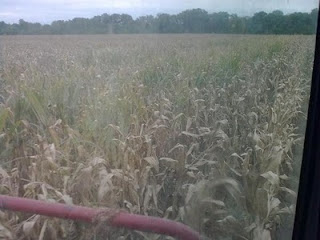 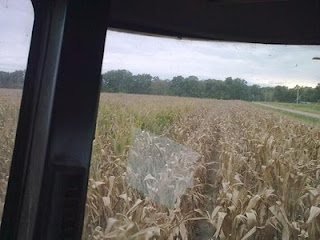 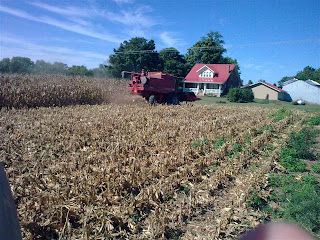 Moisture was 18-23%.  If the rain stays away we'll set up an auger or two tomorrow and start going to the bin.
Posted by Mike Bumpus at 9:57 PM No comments:

We're done with milo!   We got everything on wheels about 3:30 Monday.  All the milo stubble except the 20 east of the Shawler house is worked.

Now please excuse me as I go take a shower
Posted by Mike Bumpus at 9:30 PM No comments:

We made a bit of harvest progress this week.  We combined the milo on the dry corners at the Drake Place, the field and dry corners on Shawler, and started on Nash.  The 2 inches of rain Thursday evening kind of slowed us down 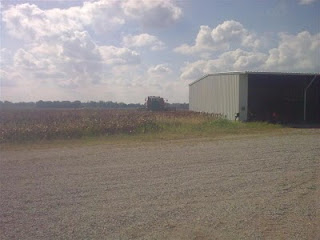 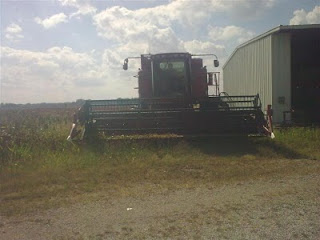 Yes, the stacks are close if you are not careful. 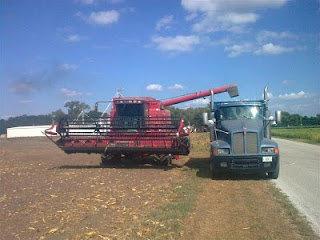 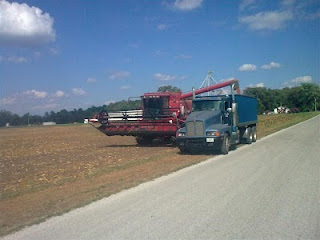 Milo has been doing OK, yield so far is around 115 bushels per acre.  We've had a drying weekend, so I'm going to try it again Monday.  With the 3 trucks, the grain cart, and wagon we can put close to 2500 bushels on wheels.

Posted by Mike Bumpus at 9:10 PM No comments: